Interested in coming to Trail Days 2023 as a performer? Get on the waitlist:
Music Waitlist

FREE concerts all weekend! Live music is located at the gazebo in the middle of the Town Park.
Bring your own lawn/camping chair or picnic blanket.

12:30-2:30pm Friday - My New Favorites
​My New Favorites features a mix of honky-tonk and Appalachian music that is authentic enough for purists and progressive enough for folks who are ready to hear the Allman Bros. played on the old time clawhammer banjo. Led by award-winning songwriter Jeffrey Benedict, MNF is danceable, fun-loving and funny. They feature top-notch fiddling from virtuoso Westley Harris, and sweet vocal harmonies from bass-player supreme Amy Benedict. Jason Carpenter, a one-man-band percussionist, rounds out the sound. The band has been featured at many festivals, concert halls and music venues in Tennessee, North Carolina and Virginia and is looking forward to playing a full schedule of shows in 2022 and beyond.
Follow My New Favorites on Facebook

5:30-7:30pm Friday - Donnie and the Dry Heavers
Coming to fruition in the early months of 2018, Donnie and the Dry Heavers strive to bring a fresh take to the musical styling of the Indie-Rock/Jam Band genres. Hailing from Kingsport, TN, this 4-piece group includes Tennessee Songwriters Sweepstakes 2022 Finalist Chance Lawson (vocals/guitar), Andrew Kramer (vocals/guitar), Cameron Hite (vocals/drums), and Magus Vaughn (vocals/bass). Together, they deliver memorable performances to audiences young and old, holding the music above all else in their travels. Through all of their struggles, hopes, and accomplishments, one question rings loud in many minds: Where is Donnie?
Follow Donnie and the Dry Heavers on Facebook 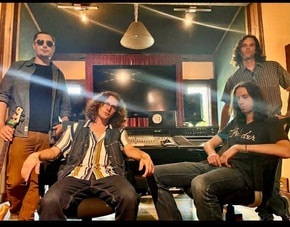 8:00-10:00pm Friday - Fritz & Co. w/ Special Guests
Based out of the Tri-Cities region in Southwest Virginia, rock and roll outfit Fritz & Co. consists of members Logan Fritz, Neal Reid, Tyler Mullins, and Matt Mullins. During the five years since the group's inception, Fritz & Co. has performed extensively across the Southeast region with notable performances including numerous appearances at Bristol's Rhythm & Roots Reunion as well as shows with artists such as Brent Cobb, Whiskey Foxtrot, Folk Soul Revival, Dangermuffin, Annabelle's Curse, 49 Winchester, and many more. With boots planted firmly in the realm of rock and roll, the group embraces all things Appalachian, and the sound has evolved into a mix of rock and roll, Americana and alternative rock with modern sensibilities and catchy hooks.
Follow Fritz & Co. on Facebook

12:30-2:30pm Saturday - BIG Son
BIG Son is an eclectic Mountain Soul band with a smidge of southern accents thrown in for good measure. Featuring players who have graced every stage in the region, this five-piece from East Tennessee covers a lot of ground, from New Orleans funk to West Texas soul and an original sound that defies categorization.
Follow BIG Son on Facebook

5:30-7:30pm Saturday - Ranford Almond
Bringing the soul from Greensboro, North Carolina, Ranford Almond is a young singer/songwriter and troubadour that has begun to make his mark across the Southeast.  Raspy fresh vocals meet the Appalachian strings of Ranford's guitar, reminiscent of John Prine and Townes Van Zandt with his own unique stamp. Furthermore, his talent extends far beyond composition and strumming, as he is a warrior with the electric as well. Ranford plays as a solo artist as well as fronting a full band. He also plays lead in the Greensboro based psychedelic folk collective Viva La Muerte.

The year 2020 saw the release of Ranford Almond's debut EP entitled "Back Burner," which is available on all streaming platforms and highlights his songwriting and arranging abilities. Additionally, at only 21 years of age he has played the stages of major venues and festivals such as Shakori Hills, The Big What?, Mantrabash, The Heap, Mayday on McGee and more. He has shared the stage with Big Something, The Mantras, The Kind Thieves, The Wright Avenue, and many more.
Follow Ranford Almond on Facebook

8:00-10:00pm Saturday - Tuatha Dea
​Tuatha Dea, The Appalachian, Celtic, Tribal, Rock Band (and family) from Gatlinburg TN has been called pure primal energy with a Celtic, World and ROCK twist. The bands eclectic sound blends the tribal vibe of primitive drums with conventional and non conventional instruments to create a real evolutionary musical crossover that defies category and genre! Combining primal rhythms, melodic and ethereal ballads, screaming guitar riffs with an Appalachian/Celtic vibe this FAMILY born of a family drum circle delivers an authentic tribal and clannish feel that not only draws the audience into the music but into the moment and clan as well. Their rhythmic groove and interaction naturally inspires audience participation which has become a staple of their performances. From the beginning the band has embraced its Celtic heritage and meshed the traditional music of Scotland and Ireland with their own bold blend of mainstream rock, mountain drumming and Appalachian blues to produce a truly unique sound that has a universal appeal! Dubbed "The Eclectic Steam Punk Partridge Family in Kilts and Corsets" and "The Appalachian Fae", this band is REAL family!!!
Follow Tuatha Dea on Facebook

1:00-3:00pm Sunday - Carson Peters & Iron Mountain
​Fresh off of his exhilarating appearances on NBC's "The Voice" as a member of Blake Shelton's team, Carson Peters and his band, Iron Mountain, will join us for a Trail Days Sunday show for the ages! Peters received a 4 Chair Turn during his blind audition at which time he chose Blake Shelton as his coach instead of Ariana Grande, Kelly Clarkson or John Legend. Peters' smooth blues tone had the entire judge's panel really impressed! Carson started playing the fiddle at the ripe old age of 3 when his parents bought him a 1/8 size fiddle. By age 4, he was playing in fiddle competitions and jamming at musical festivals. Peters has continued to hone the fiddling and singing talents that God has so graciously blessed him with and has won many competitions along the way. At 18 years old, Carson is a seasoned performer playing numerous venues with his band Iron Mountain throughout the United States and Canada; Bristol Rhythm and Roots, Dollywood’s Bluegrass and BBQ, Song of the Mountains, Carter Family Fold, Silver Dollar City BBQ and Bluegrass, Jenny Brook Bluegrass Festival, and Bluegrass Island just to name a few. Carson has had the honor of playing on national TV multiple times, most recently on NBC's The Voice but also as a guest on NBC’s The Tonight Show with Jay Leno, Little Big Shots with Steve Harvey and with Jimmy Fortune on the floor of the Tennessee State Senate. On March 28, 2014, Carson’s dream of playing on the Grand Ole Opry stage was realized when he was invited by Ricky Skaggs to come perform with him and his band, Kentucky Thunder. In May of the same year, Carson was asked to make a reappearance at the Opry, but this time with his own band. On July 31, 2014, Carson made his Ryman Auditorium debut playing again with Ricky Skaggs during the 2014 Bluegrass Nights series. Since these appearances, Carson and his band have performed numerous occasions on the Opry Show. In November of 2018, Carson was thrilled to be asked to play fiddle for his buddy Ricky Skaggs when he was honored at the nationally televised 52nd CMA Awards Show.
Follow Carson Peters & Iron Mountain on Facebook